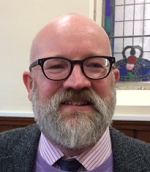 Members expecting a brief history of the statues on George Square received a fascinating tale of the origins of the Square and its ups and downs since 1781. Niall’s story started in 2012 when the City Council was contemplating the refurbishment of the Square. These controversial proposals, which failed to take account of the Square’s historical legacy, were set aside. This opened the door to Niall to embark on gathering the historical details of the development of the Square and its statues.
Hutcheson’s Hospital originally owned the land now occupied by George Square. The ground was marshy and far from attractive. The Burgh Surveyor of the time, James Barry, was charged with planning the westwards extension of the City. He chose to adopt a grid-iron pattern influenced by developments in North America with whom Scotland had good trade links at the time. The Americans, of course, had been influenced by Greek and Roman grid iron settlements planned some 2000 years previously!
The first statue to grace the Square was of the popular Sir John Moore who perished during the Peninsular War. Before his death he skillfully managed a strategic withdrawal against superior forces and achieved a Dunkirk-like rescue from Corunna. This success was saluted by Marshal Soult of Napolean’s forces by the construction of a tomb for Moore in Corunna.
By 1828 the Square had been developed as a pleasure garden with a fountain in the centre and a classical Georgian fence around the edge. Over time the Square acquired more statues. The spectrum grew to include royalty, soldiers, poets, politicians and scientists.
Later designs of the Square were influenced by Places des Vosges and Place de la Concorde. John Carrick, City Architect, believed in seeking inspiration from Europe. Carrick made great efforts to achieve harmony in the placing of the statues pairing royalty with royalty, soldier with soldier, politician with politician, etc. Initially the orientation of the Square was North-South provided by North Frederick Street and Miller Street marked by the Sir Walter Scott Monument. Later the orientation shifted East-West reflecting the changing centre of gravity of the City.
The Square has been at the heart of events, public meetings and political gatherings over the years. The Black Friday Rally in 1919 which descended into violence is perhaps one of the best known helping to establish the City’s Red Clydeside reputation. The Riot Act was read, and the government fearing a Bolshevik type revolt, deployed troops and tanks into the Square.
Competitions were held in 2005 and 2012 for the re-juvenation of the deteriorating Square but with little success and, as indicated, some controversy. Niall suggested that the City wouldn’t go far wrong if it took a leaf out of Berlin’s book where Schinkelplatz, destroyed during WWII, was restored to its original design. An approach which he believes could be done at a much more modest cost than emerged from these earlier competitions.
This was a fascinating talk where members enjoyed hearing a detailed history of one of the best known parts of the City. Niall is to be complimented on developing such an interesting ‘obsession’. His work will serve the City well in the years to come as the regeneration of the Square is addressed once more. (For more information on Glasgow’s heritage : www.glasgowheritage.org.uk)