Once again an enjoyable lunch was held at Hughenden. The address was given by the Rev Campbell McKinnon, Balshagray Victoria Park Church 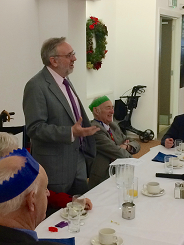 Reverend Campbell McKinnon’s thoughtful and thought provoking talk focused on change. Campbell gave many examples illustrating change but one of the best related to his Grandmother who was born in 1890 before the first heavier than air aircraft flew. However by the time she passed in 1980, man had stepped on the moon and people were routinely traveling the world in jet airliners. Change, he said, is a defining characteristic of our time.

After describing many examples of change, Campbell concluded that most change in recent times has been material and worldly. However, he believes that there are signs that people are looking for more meaningful and spiritual change. It is his hope for the future that we might look for more to life so that our relationships with others and the world are better.

For the full text of Campbell’s talk follow this link

Visit to the Peoples’ Palace

Our group of 18 enjoyed a cup of coffee in the Winter Gardens before embarking on an informative and entertaining tour of the exhibits in the People’s Palace.  Everyone was able to relate to the past history of our great city and many a laugh was had at some of the shared memories.

Visit to the Clydeside Glencairn Distillery

The tour of the Clydeside Distillery was a huge success,  made really  interesting by our tour leader.     Seventeen members sampled whiskies from the Lowlands and Highlands and Islands. Unfortunately we will all have to wait three years for the Distillery’s own Whisky to be sampled when we hope to have a return visit.

Visit to The Britannia Panopticon

The visit to the Britannia Panopticon, the World’s oldest surviving music hall, definitely aroused the interest of the 18 attendees. The building itself is a microcosm of a common form of entertainment venue popular in Victorian Glasgow.

The history of the Panopticon is given in full at www.britanniapanopticon.org/history/ and makes interesting reading. A long list of stars of their day include such names as Harry Lauder (astonishingly to the present generation, a pin-up boy of his age and at one time the highest paid entertainer in the world) and Stan laurel.

Built in 1857 by Thomas Gildard and H. M. McFarlane, it has hosted some of the biggest names on the Music hall circuit. In 1906  A. E. Pickard bought the building and changed its name to the Panopticon. He also undertook some major works, installing a freak show, a roof top carnival and a waxworks. He also excavated the basement and installed an indoor zoo. The Panopticon was one of the first buildings in Glasgow to become powered by electricity and one of the first cinemas in Scotland. It closed in 1938 when it was sold to a tailors and converted to a workshop. (source Wikipedia) Many will remember the name  A E Pickard as one of the first property speculators in the 1950’s until his death in 1964. More interesting material can be found at www.pickardspapers.gla.ac.uk

The visit was enhanced by a talk on the operation of the music hall over the years. A vivid description of the frightening predispositions of the unwashed late-Victorian audiences made the mind boggle at the thought of 1200 patrons, less than sober, packed into a space without sanitation of any sort; probably in today’s terms suitable for a maximum of 200.

A demonstration of a pedal driven pianola and a tour of the many artefacts on display concluded the visit.

To view the individual photographs click the yellow dots at the top or click the centre of the picture to initiate a slide show.

VISIT TO THE KELVIN HALL

Once again a Christmas lunch was held at Hughenden Rugby Club. The festive atmosphere complemented an excellent meal which everyone thoroughly enjoyed. A more sobering talk by the Rev Jane Howitt outlined the range of activities within her parish of St Rollox. The care of all her parishioners, including a large number of asylum seekers, was one her Church’s paramount objectives. Read a fuller account of her talk by clicking here

The three masted barque Glenlee is one of the five surviving Clydebuilt sailing ships afloat. She sits at Pointhouse Quay beside the Riverside Museum as a reminder of, and testament to, the people who built thousands of ships on the Clyde during the latter half of the nineteenth century.

The supply of vessels to a World market is evidenced by the fact that from her build by Anderson, Roger & Co, Port Glasgow in 1896, she travelled to the four corners of the Globe but never returned to the Clyde until rescued by the Clyde Maritime Trust in 1992.

Today’s visit of fourteen Probus members, organised efficiently as usual by Archie Henderson, was illuminating and enjoyable. The heavy rain somehow added to the atmosphere engendered by the anecdotes of the official tour guide who gave a taste of what shipboard life must have been like while trading all over the world.

The imagination boggled at the thought of working a sailing ship in heavy weather, particularly when aloft, with a foothold on a piece of rope, balanced over a yard and holding on to work the heavy wet canvas. Wouldn’t, I expect, be made easier by the motion of the ship and being 120 feet in the air. The men who manned these ships must have been a hardy breed!

The fourteen hardy souls who attended enjoyed an interesting and informative tour. As usual the day out ended with coffee and scones with an additional issue of shortbread and Christmas pies supplied by Neil Macintosh.

The photographs below tell the story of our visit which was both enjoyable and extremely informative, showcasing the enormous range of topics taught.

The final outing of the 2016 – 2017 session was on Thursday 1 June to Pitlochry Festival Theatre to see J. M. Barrie’s play “Marie Rose”. 12 members and guests, making a total party of 21, left Jordanhill at 9.30. Members made their own arrangements for lunch, before curtain up at two o’clock.  “Marie Rose” is a rather eerie, mysterious supernatural play, which was written in the aftermath of World War One. The production was much admired and gave considerable food for thought during the return to Glasgow.

Members enjoyed a great day out at Malcolm’s Heritage Museum.  Mr Calderwood, our guide, was totally passionate, as well as knowledgeable, about his subject. He thoroughly impressed his audience.

Once again Probus members, family and friends enjoyed an excellent lunch served by students learning their trade at the Glasgow Clyde College, Anniesland. This could be called a win win situation.

Tour of the Police Museum, Bell Street.  This proved to be an interesting tour which chronicled the history of the UK’s first police force, the gallantry awards of its members during the war, some of the most notorious criminals and their deeds and many examples of uniforms and tools used throughout its long history.  There is also a collection of uniforms from police forces across the world making this museum unique, not only to the UK, but also worldwide.

Around 80 members attended a very enjoyable lunch at Hughenden Rugby Club on 13th December. An attentive audience was regaled by a speech by Stuart MacQuarrie, the University Chaplain, Glasgow. 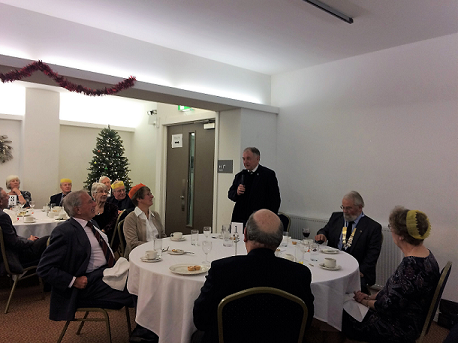 Visit to the STV studios

A small band of Probus members enjoyed being shown round the STV studios and seeing first hand the making of the news and all the technology required to put a programme out on air. 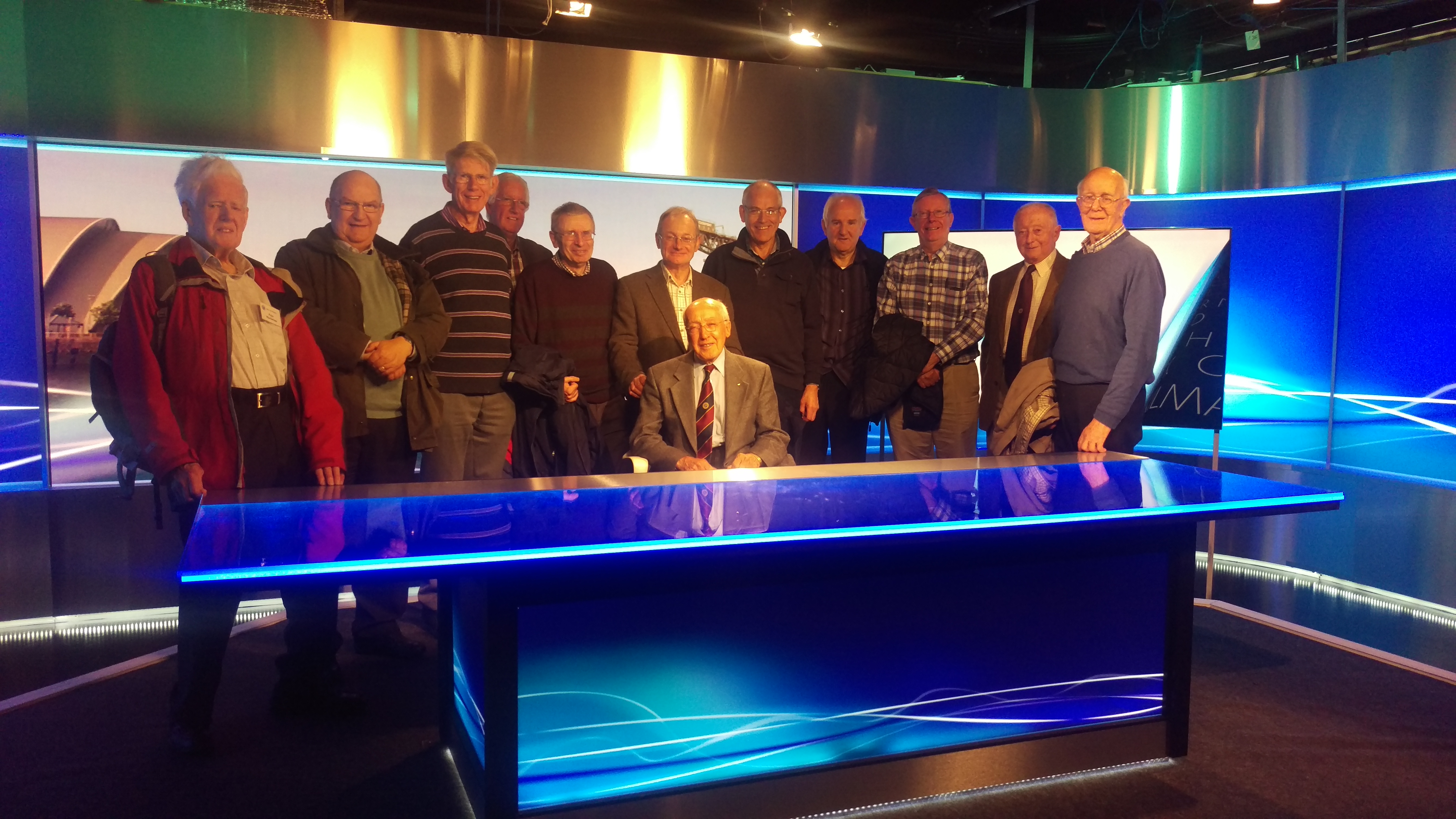 SOME PHOTOGRAPHS FROM PAST EVENTS