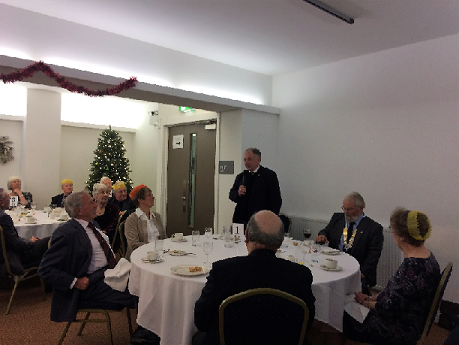 One could understand how Stuart had first come to our President’s attention, when Robin was Vice Principal at Glasgow University.  Stuart had submitted a request for £500,000 to the University to repair the University’s Bute Hall organ (a classic of the 1920’s).  Stuart later defended himself observing that there had been a fire in the organ, so no ordinary repair!    Stuart MacQuarrie, University Chaplain at Glasgow, built bridges with our members by observing that he was pleased to see people in the audience that he knew, like John McIndoe and Nick Kuenssberg.  His relationship with the University, Glasgow Warriors and Glasgow Rangers firmly established his credentials with the gathering.    ‘Did some remember the days before central heating when we had to scrape ice of the window on cold frosty mornings?’ he asked.  From the nods around the room it was clear many did.  Then, just as Stuart was getting into his stride, he experienced technical problems with the mike.  Like a trooper he turned up ‘his volume’ until Ross changed the batteries and normal service was restored.    Stuart arriving at his Christmas theme spoke of the School Nativity Plays, the fun in the children’s participation and the sensitive challenge of getting a reference to King Herod’s slaughter of the innocents backdrop in biblical times.  Does it have relevance today?   Stuart addressed this question with entertaining diversions about taking chances in life, for instance the choice of one’s partner for life or one’s dentist, etc.  His first management experience with McKellar Watt of sausage fame.  He gave us graphic information about the ability of technology to help render any part of the animal edible (fortunately we had finished our lunch!).   The metaphorical point of this being that all the roles in the nativity play from Caesar, through the three Kings to the babe in the crib and the parts played by friends and family in the audience are all in it together.  Stuart’s message is that all have a part to play in the grand scheme of things, something not to be forgotten.   So have an enjoyable festive season and a happy, healthy and peaceful 2017 when it comes.