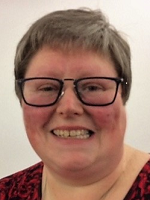 The Rev Jane Howitt engaged totally with her audience as she unravelled situations which went to the very core of what Christianity means. She spoke movingly of people of different faiths really going out of their way to support and help others; of a deep-seated understanding of how to meet the challenges of sometimes unacceptable accommodation with little to spend on food and any extras.
She described her Parish as a veritable United Nations. Its congregation is drawn from some forty countries as well as those born and bred in the area. This is a dramatic contrast with Rev Jane’s former parish in the scenic Scottish Borders. Since moving to St Rollox two years ago, she has been at the forefront of a wide range of initiatives, not only for the benefit of the asylum seeker members within her congregation but also of local indigenous Glaswegians.
To make clear that the challenges were not solely refugee driven, Rev Jane movingly read a letter of thanks from a 50 year old local man who had been totally down on his luck. He had been refused any benefits or state support because he had no address. Yet he has now, due to the care, guidance and advice of the Church’s service turned his life around. A chilling reminder of how the Welfare State can, at times, be particularly cruel to those most in need of support.
Asylum seekers are not permitted to work, and are therefore, dependent on benefits, an unfortunate situation. The benefits given are considerably less than normal Income Support. A challenge to those who have fled to save their lives but now having to come to terms with situations which demand a depth of patience, tact and tolerance. A challenge made worse by being in an environment which is foreign to them in every way, not least due to a lack of English language skills.
Rev Jane was proud to relate that those who were formerly enemies now sit side by side in St Rollox. For instance, the two tutors of the sewing class, tailors from opposing countries, guide their students to the development of often exquisite garments such as elaborate First Communion Dresses. Yes, those from all religions are welcomed at St Rollox. Other skills being taught include teaching English as a foreign language and computing.
Critical to the mission is the running of a charity shop providing the widest range of items imaginable at prices attractive enough to draw buyers from across a wide area of the city and beyond
The total focus given by the audience to the Rev Jane Howitt was testimony to their engagement with the wonderful work being done, the total commitment of an extraordinary representative of the Church of Scotland and, critically, the positive impact on a parish which few ever imagined could exist, so close, yet so far, from the norm with which they are familiar.