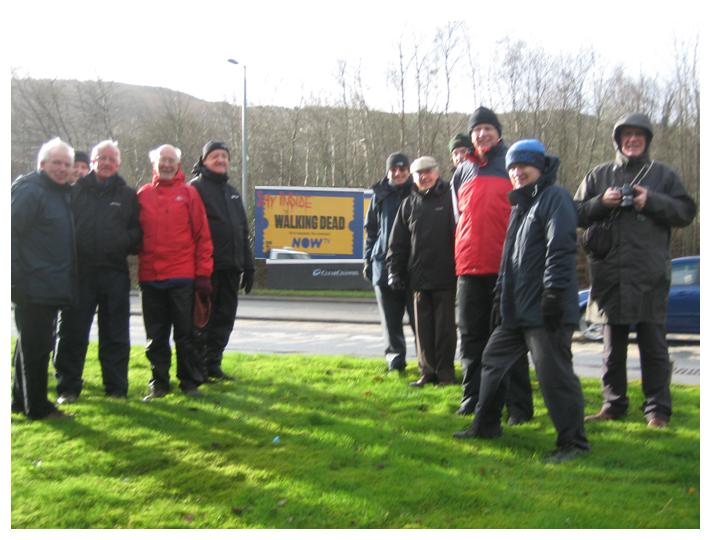 Jan 4th 2022: Local walk from Anniesland via Gartnaval hospital grounds to and round Victoria Park and back.

Oct  19th 2021 Clydebank to Anniesland via canal – took the train to Clydebank and walked back along the canal towpath.

Oct 3rd 2021   Claypits  Starting from Tesco car park, the walk was a crircular walk along the canal towpath to Applecross, returning via the claypits through Westercommon and Ruchill.

Covid walks have been held throughout the restricted period in Jordanhill, Kelvindale, Kirklee, Hyndland, Dowanhill, Scotstoun, Knightswood, Garscube, Westerton, Bearsden, Broomhill and Partick, without the need tu use public or private transport. 2 metre distancing, and all other rules adhered to at all times.

17th March2020    Canal and River Kelvin circular walk.  Close to home and no public transport or cafe stop because of Coronavirus.  9:30 Anniesland  Cross, 9:45 Kelvindale Station.  About 4 miles, flat paths.  Bring a flask of tea/coffee if you want a hot drink stop!

3rd March 2020     Glasgow’s Epidemics.  Starting at Queen Street station, the walk headed for Rottenrow, site of the old maternity hospital for the first briefing on famous Scottish doctors and medical advances in Glasgow.  We continued to High Street for the second briefing about medieval Glasgow, typhus, cholera, surgical advances in the Royal infirmary and the isolation sanatoriums.  The talks continued as we headed down High Street and into Glasgow Green for coffee at Peoples Palace. After the refreshments we headed across the Clyde to the Nautical college, site of Glasgow’s leprosy isolation unit, before heading back to Central Station for the train home.

18th February 2020:   Starting at SW gate of Bellahouston Park on Mosspark Boulevard, we headed off to Corkerhill road, walking south till we crossed the railway. We continued to the west gate of Pollok park, from where we followed the White Cart to Pollok House. After a cup of coffee/tea and a scone or cake, we continued through the park passed the Burrell collection, up through the forest and out on to Dumbreck road, round into the Boulevard and into Bellahouston Park. The walk through the park took us up to the highest point, from where we skirted the back of the Ski Centre and down steps to the Sports Centre, passing the Empire Exhibition Memorial on the way.  A straight path took us back to the waiting cars.

4th February 2020  Gilshochill to Cadder:    Train via Kelvindale to Gilshochill from Anniesland 9:34.  (9:20.or 9:23 from Hyndland – change platforms to pick up 9:34).  Kelvindale 9:36.  Leaving train at Gilshochill, the walk is eastbound along the canal to Cadder (Bishopbriggs).  Coffee stop at the Briggs Sports Centre. Walk length about 4 miles. Bus back to city centre for train home.

7th January 2020     Carbeth Circuit  (4.1 Miles)  Despite the dire forecast of high winds and heavy rain 8 walkers set out from the Khyber car park. As it turned out there was no wind and most of the walk was in the dry. We noted the everlasting flame monument which had in the past, as a real fire, had welcomed some of Glasgow’s unemployed to the spot. We also noted that the” huts” had gone up in standard and had now become “chalets”. Coffee and snacks were enjoyed at the courtyard café. A good walk to get us going again.

3rd December   Erskine Bridge.  Starting at (Old) Kilpatrick Station, 8 walkers proceeded over the railway line, following the path which led to the South bound side of the Erskine Bridge.  A cool dry start with little wind and views both up and down the Clyde made the trip over the bridge a great start to the day. we headed down to the east side of the bridge, through the parkland on a good path which forms part of the Clyde Walkway.  We circled round under the bridge, sandwiched between Erskine golf course and the river Clyde before turning up through the golf course into the forest.  Ground was a bit muddier here, but not too bad. We left the forest and passed the Hewlett Packard factory be fore heading into Erskine House for a well earned refreshment. From there, a straightforward roiute too us out the main entrance and back up on to the bridge for the return to the station in (Old) Kilpatrick.

19th November:  Newton to Dalmarnock along the Clyde Walkway.  Pleasant walk on flat terrain from Newton Station.  Walked to the Clyde walkway and followed it all the way to Dalmarnock, via the Commonweealth
vi 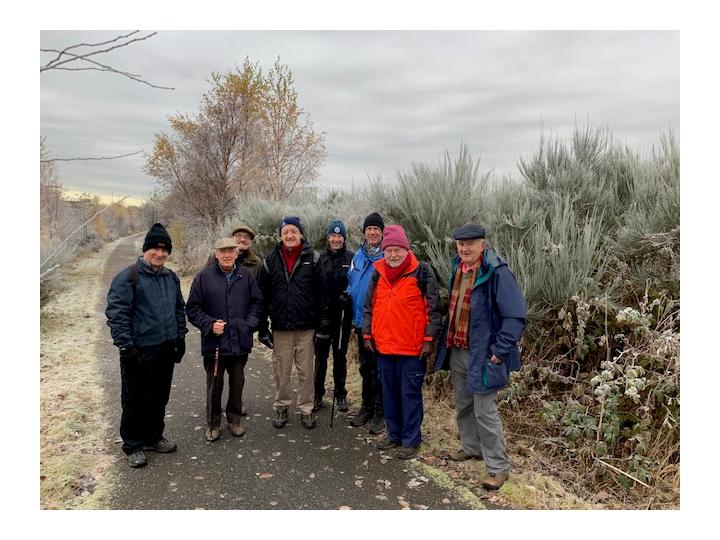 llage and the coffee stop at the Emirates Stadium.  Approx 5.5 miles of easy walking.

29th October:  Orbiston & South Calder Water.  Starting from the beach car park in Strathclyde Park, we ventured north on the east path of the loch.  We left the park, shortly after the “reconstitued” Roman Bath house before crossing the road to view thew old bridge over the South Calder Water.  We headed into the woods and followed the river passed the golf course to Orbiston, where we circled round back to the park.  (Photos)

15th October:  Jordanhill Church to Clydebank via canal.   Return by no 6 bus or train from Clydebank.

17th September:  The “Secret Loch”.  Starting in Milngavie, we followed the first 100 yards or so of the West Highland Way before taking a left turn and crossing the Allander to Clober Road.  Cutting through the housing estate, we wound our way passed Craigdhu Primary School and followed the burn down Craigdhu Wedge into Mosshead.  From there we took a slightly indirect route to Kilmardinny Loch where we continued round two thirds of the loch before heading for the main Glasgow/Milngavie road, coming out opposite Kelvin Timber.  After a bacon roll and cup of tea/coffee at the Burnbrae, we headed towards Milngavie, taking a right at Keystone before cutting through Lennox Park to the station for the train home.  (Photos)

14th May:   Chatelherault Green Bridge circuit and Annual Lunch.  Alighting from the train at Chatelherault Station, 14 walkers headed into the park and up to the lodge from where we took the trail to the Green Bridge and on round the outer circuit through woodland, moorland and open scrub in glorious sunshine all the way.  The circuit took is back to the lodge where we enjoyed our end of season lunch. 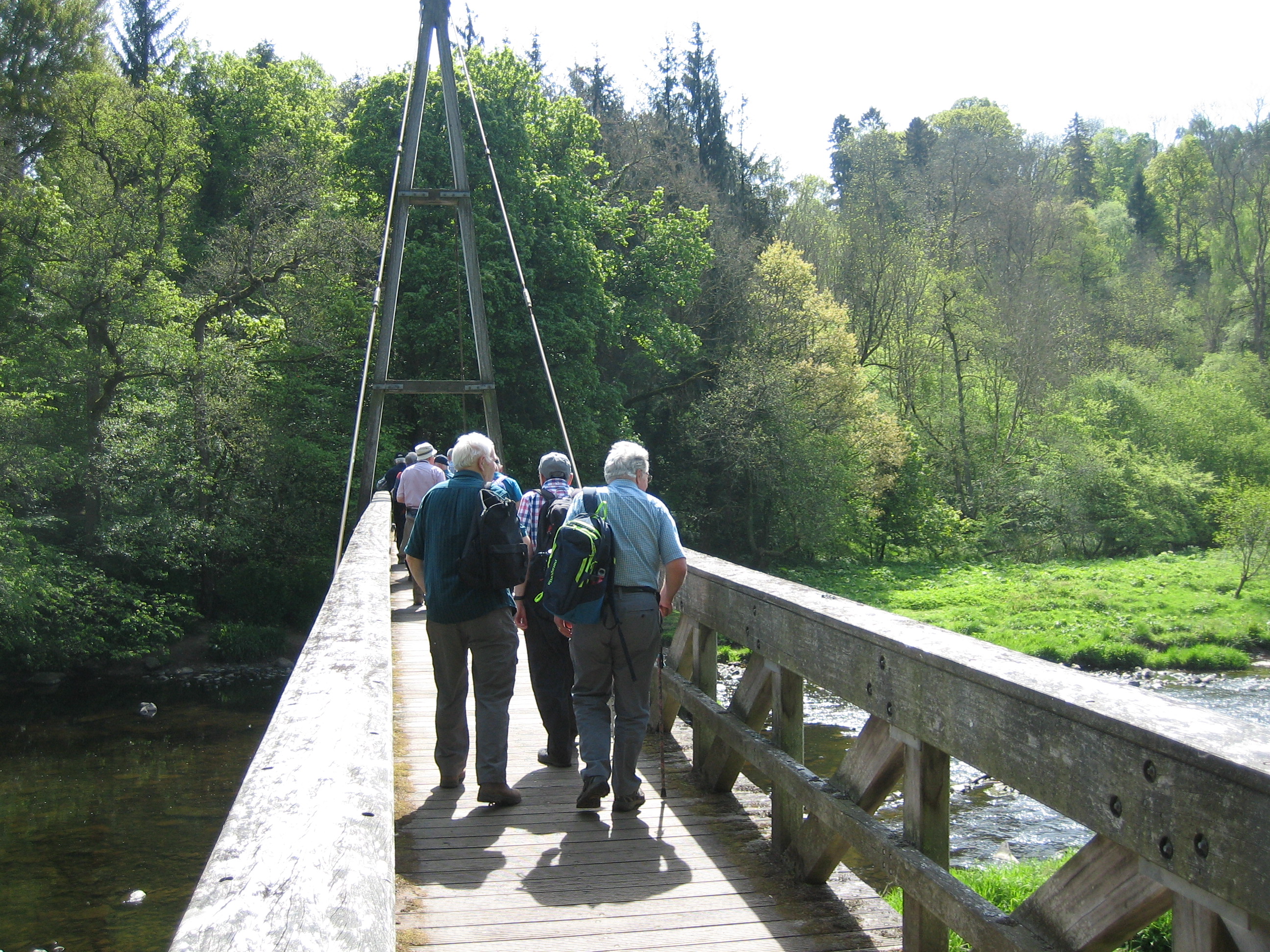 30th April: Faifley to Milngavie over Douglas Muir.  Eight walkers and Murphy the dog took the bus to Faifley and walked through the Cochno area over Douglas Muir and Craigton on the Clyde Costal Path.
We saw one deer, heard the Cuckoo and saw lots of sheep.
Visited one cup and ring marked rock site close to the path and watched quarrying in progress on Douglas Muir.
Returned by bus or train to Glasgow just before the rain.  (Photos)

5th March 2019:  Dalziel & Baron’s Haugh:  Cars parked at Strathclyde Park South car park. From there we followed the path which took us into the Dalzell Estate.  The walk took us round Baron’s Haugh, an RSPB protected loch, although there was little sign of birdlife, skirting the river Clyde before returning to the cars.

19th February 2019: Strathclyde Loch and Low Parks Museum.  We parked the 2 cars at the south east car park in Strathclyde park and set off North up the loch. God flat tarmac paths meant boots were not necessary. The walk was a circular one, round the loch, with a diversion at the south west where we left the loch, passed the Hamilton Mausoleum, and onto the Low Parks Museum for a coffee break.  We then returned to complete the circle of the loch.

17th January 2019: Took the train to Drumry for the walk through Garscadden Commonwealth Woods. Crossing Great Western Road, we headed west and then North at the roundabout.  After a few hundred yards we headed left onto a path which took us into a small wood.  From there we followed this path till we skirted Drumchapel and entered the Commonwealth Woods.  Once in the woods we followed the signposted route and came out onto Kinfauns Drive before heading to Drumchapel station for the return train.  The walk was almost 5 miles.

20th November 2018.   “Craigie” (Duncarnock Fort) near Neilston. Took cars to Neilston.  From there we walked to the remains of an old Iron Age fort atop a small hill above Glanderston dam with views up over Glasgow.  The walk followed the route of East Renfrewshire recommended walks (Map).  Boots were needed, as path was slippery and rocky in places.

16th October 2018  Frankfield and Hogganfield lochs.  Approx 5mls and level.  A figure of eight from Stepps took in two of the “sevenlochs”

2nd October 2018 To Clydebank.  Starting at Jordanhill Church, 7 walkers headed to pick up the nature trail at Westland drive which we followed to its end at Dumbarton Road. Crossing the road, we headed to the Clydeside cycle path which we followed west all the way to Clydebank. A stop off at the college cafe for a well earned tea or coffee was followed by a number 6 bus back home.

18th September  Dean Castle Park.  This short walk of just over 2 miles started at the car park and followed the river till the joining of the two rivers.  It then doubled back passed the castle and on to the first stop – the cafe – for our morning break.  Once the rain had subsided, we ventured out to follow the countryside trail which, though quite short, had some interesting and varied wildlife.  The rivers were in full flow, and the six of us who ventured out had an enjoyable morning’s stroll.

17th April 2018  The walk was around Pollok park, with a short detour over the Motorway, through a muddy field and back under the road.  We concluded the walk in Pollok House with a cup of tea/coffee and a scone or cake.  (Photos)

3rd April 2018   This walk was to Summerlee Museum. Starting at Blairhill Station the route headed to and followed the course of the Monkland canal to Summerlee where the walkers enjoyed their visit to the museum.

In blizzard conditions, 4 walkers braved the elements to complete the walk from Newton station up and along the Clyde before turning down and finishing at Cambuslang.

6th December 2017  Bowling to Dumbarton. finishing with a tour of the Denny Tank Museum.   (Photos)

2nd May 2017  – Cambuslang  To Carntyne via Tollcross Park (Details)