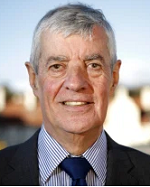 John McCormick   After graduating from Glasgow University, John taught history in a Glasgow comprehensive school for two years before joining the BBC’s Education Department. He became a member of BBC Scotland’s Management Team in 1982 and moved to London in 1987 as The Secretary of the BBC, responsible to the Chairman and Director General for the governance of the BBC, while acting as the link with the appropriate Government Department. He returned to Scotland to take up the post of Controller, Scotland in 1992.

In retirement John has pursued his interests in education and the arts in a number of roles including as Chairman of the Scottish Qualifications Authority, Chair of the Edinburgh International Film Festival, a member of the Court of Strathclyde University, a Governor of the RSAMD and a Board  member of the Glasgow School of Art. He was the Electoral Commissioner for Scotland from 2008 till 2016 and chaired the Commission on Parliamentary Reform which reported in June 2017.