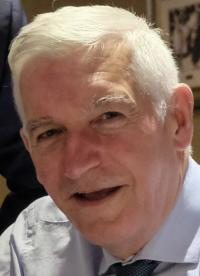 John Clark’s talk was a great ice-breaker for our first formal Zoom Session for the start of our 2020-21 programme. It was a privilege to be looking over the shoulder of an eminent international pathologist. That said, it was a very sober presentation, as to be expected, given his subject of forensic pathology. His cases involved humanitarian issues, human rights abuses and international crimes.

The first case dealt with the aftermath of the 1982 conflict with Argentina. John’s mission in 2017 was triggered by the 235 Argentinian soldiers buried on the Falklands. Some 121 were not named as they had no dog tags or other obvious identification. Their grave stones said ‘Known only to God’. They were mainly young conscripts of 18 to 20 years age. The International Committee of the Red Cross (ICRC) had responded to a request from the Argentinian President, Cristina Kirchner, to seek help to identify the unknown soldiers for the benefit of the families. While  John suspected an underlying political purpose in the approach, DNA identification techniques had dramatically improved since the war.

The investigation was undertaken by a multi-disciplinary team, mainly Spanish but including two specialists each from the UK and Argentina. They comprised archaeologists, anthropologists, pathologists and database people, all working in a temporary mortuary. The DNA samples taken were sent to labs in Argentina, Spain and the UK. These were matched with Argentinian families’ DNA. Some 115 out of the 121 bodies were ultimately identified. No mean feat after 35 years. Following this, Argentinian families were allowed to visit the newly named graves to say their farewells in March 2018, clearly a moving experience.

The next case John shared was an autopsy of General Asif Nawaz, Chief of the Army Staff, Pakistan. The General had died suddenly in January 1993. There were persistent rumours of foul play and samples of the General’s hair were spirited to the US to be examined for poison. The results confirmed the presence of arsenic suggesting that the General’s death was due to poisoning. A Judicial Inquiry called for independent specialists from abroad to investigate. So in October 1993 John found himself one of three international pathologists in Pakistan to exhume and examine the body for foul play. Their findings were negative and the team concluded the General had died from a heart attack as originally determined.

The story, of course, was much more complicated. It became apparent to John that the timing of the exhumation just before the election in October 1993 was not accidental. The results couldn’t be available before the election was over. So it was evident that there was skilful political choreography to hint at the probability of deliberate poisoning. This influenced the outcome of the election! As John said, an example of ‘fake news’ in 1993! So ‘there’s nothing new under the sun!’

Then John moved to Egypt. It was the ‘dodgy death’ of a student Khalid Saeed. He had died in mysterious circumstance in the custody of the police. His family sought overseas help to unravel the mystery. John and other pathologist colleagues were brought in to make their independent assessments. It was clear that the injuries documented could not be explained by the police or witness accounts. While the results were inconclusive, the continuing public outcry resulted in two policemen being arrested, tried and convicted. What John then revealed was that it was the long lasting furore over Khalid Saeed’s death that triggered the Egyptian Arab Spring. And, the rest, as they say, is history!

John then introduced us to the Beslan massacre in 2004 where 333 hostages and 30 terrorists died. Some 1100 hostages, all of North Ossetian / Russian origin, including 800 children, were taken and herded into a school gymnasium. After an explosion on the third day, Russian Special Forces stormed the building. In the aftermath the Russians carried out a ‘full’ forensic examination within 24 hours and then handed over the building to the local authorities.

Due to the unsatisfactory outcome, 409 relatives from Beslan appealed to the European Court of Human Rights some years later. They held the Russian Government responsible for the poor handling of the siege and the deaths which occurred. The families wanted a better explanation of what happened. John’s role was to review the post mortems. Basically, he found serious failings in terms of pathology practice, both medical interpretation and the lack of photos and evidence, not to mention simple poor mortuary management. In addition, there had been no attempt to keep relatives informed. Ultimately the ECHR determined in April 2017 that there were serious failings in the Russian response to the Beslan attack. The Russian Government was fined 2 million Euros and this money was paid in compensation to the relatives.

John moved on to focus on his involvement with the International Criminal Tribunal for the former Yugoslavia (ICTY). He started with giving a history of the Balkans Warin one minute! In essence, when Tito died in 1980, tensions between the original constituent Balkan countries re-emerged. Between 1990 and 1999 Serbia launched a series of wars with its neighbours and encouraged Serb communities in these territories to rise up in civil wars. There were tens of thousands of deaths during this time. Ethnic cleansing was worst in Bosnia where the Serbs were seeking to create corridors of Serbs, resulting in many mass graves during the hostilities. John was amongst the international team of evidence gathers and was involved in the exhumation and examination of bodies. It included anthropologists, archaeologists and the inevitable data specialists to track all the evidence gathered. Some 161 individuals were indicted as a result of the investigations and more than half of them were convicted and sentenced. These sentences are being enforced in 14 states across Europe.

It’s not possible to do John’s talk justice in a short blog of this nature. He gave great insights into his challenging work. One had no doubt of the humanitarian value of identifying the unnamed Argentinian soldiers in the Falklands and unravelling the mysteries of what happened in Beslan. John also revealed how the pathologist can get sucked into political games in Pakistan and Egypt. Last but not least, the value of bringing war criminals to book for crimes against humanity and genocide. Members welcomed the opportunity to bear witness to John’s important work.