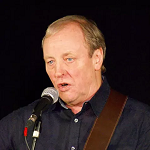 Archie Henderson started the fun by rising immediately Fraser started talking.  He drew an ‘old fashioned look’ from Fraser as he went to switch off the lights.  ‘No doubt your image of folk singers of the past was long hair and a lot of drinking?!’ asked Fraser rhetorically.  ‘Well, you’re right!’  So after laughter subsided Fraser launched into his entertaining narrative on the folk scene.
For Fraser it started in Rutherglen Academy where Norman Buchan, the complier of 101 Scottish Songs in 1962, was one of the teachers.  After school he could have 50 to 60 pupils in the room singing lustily.  Later Fraser told us that two other teachers, Adam McNaughton and Ian Davidson, were also into the folk scene.  Adam was the song writer for the Jeely Piece Song – ‘Ye cannae fling pieces oot a twenty-storey flat’.  Fraser sang a few lines and members quickly joined in!  Indeed members enjoyed the way Fraser constantly broke into to song to illustrate his stories.
Pete Seeger and his songs of protest had also been one of his inspirations.  Indeed it became clear that protest, whether CND, Anti-polaris, Anti-war, miners’ strikes, etc is a great catalyst for folk songs.  He talked of the Ding Dong Dollar protest album triggered by the US Base in the Holy Loch and Polaris Missles.  It’s success set in motion the establishment of commercial folk music in Scotland.  Later we discovered that Pete’s sister Peggy married Ewan McColl, another leading light in Folk Music.  Although English born, he was of Scottish parents and steeped in the protest movement.
Closer to home Lonnie Donnegan, who played banjo and guitar for Chris Barber, had also been a great inspiration with his Skiffle Music.  All remembered his classic(?) Chewing Gum on the Bedpost.  This and his many other numbers had inspired thousands to go out and buy guitars including Fraser.  Names of those involved in the folk scene such as Hamish Imlach, Matt McGinn, Alex Campbell, Peter Morrison, Jimmy McGregor and Robin Hall tripped off Fraser’s tongue.  There were even posh ones such as Jean Redpath and Gordeanna McCulloch. This is Fraser’s rich folk scene.
In the present day scene, he finds that the technical skills of the young musicians is superb.  However, their communication skills and banter with the audiences lacks the vitality of the past.  It emerged the demographic of the audiences has shifted towards the older end of the scale.  Young people are now about 45 and the core age group is about 60.  The digital age and different life styles mean that younger people tend to prefer going to music festivals where they can hear up to 20 groups over a weekend.  Paying for individual concerts is seen as expensive and not favoured.
Fraser entertained the Club all the way through his talk.  He is full of patter and song, much too much to cover here.  Members enjoyed being reminded of singers, songs and stories of the 60s and 70s.  It was very enjoyable to have a natural!  (For more info see https://www.fraserbruce.co.uk)