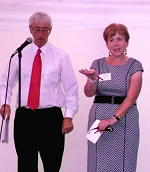 The Central Hotel in Glasgow, adjoining Central Station, has had a place in the city’s history since 1883. It was once the place to see and be seen, whether it was enjoying fine French cuisine in the famous Malmaison restaurant, attending a social function in the elegant ballroom, or simply standing outside waiting to see the many stars who once stayed there while performing in the city’s many theatres and music halls. Laurel and Hardy, Sir Harry Lauder, Guy Mitchell, Danny Kaye, Mae West, Bob Hope and Frank Sinatra were among those who have stayed there.

After several years of decline the hotel was refurbished in 2010/11 and now has a standing in Glasgow’s life once more.

When it was discovered the hotel’s history had never been documented journalists Jill Scott and Bill Hicks were given the opportunity to do so. Today they will speak about how they researched the hotel’s fascination past and wrote the book about Glasgow’s Grand Central Hotel

One thought on “The Central Hotel”