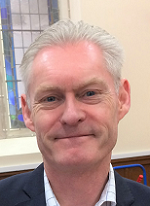 Neil Greig presented his talk at a cracking pace. By the end members understood why – he had a lot of ground to cover!

IAM driving standards originally sought were, and are still, based on the Police Driving Handbook when it was established in 1956. A strong tradition which survives to this day. Neil advised that the Institute had rebranded itself in 2016 in order to appeal to younger drivers who they found were increasing put off by the old fashioned image implicit in the term ‘Institute’. So IAM has been rebranded IAM Roadsmart to reflect the new ‘demographic’. As Neil wryly observed, death, illness and age took their toll on membership levels!

This has caused IAM Roadsmart to ‘modularise’ their services to appeal to a broader church. This includes carrying out License Checks, selling Driving Apps, undertaking Driver Risk Assessments, providing E-Learning Modules, On-the-Road Modules, etc. The aim is to ‘make better drivers and riders’.

There are three key principles in advanced driving, Observation, Anticipation and Planning. The acronym OAP is regretted but unavoidable for their simplicity and clarity. He admitted that it had been found over time that the record of members of IAM/ IAM Roadsmart was no better than the average driver. Hence ‘Masters’ of IAM Roadsmart must do refresher courses every three years to maintain their proficiency.

In 2016 the number of deaths on the road was 1,792. Much better than the 8,000 deaths reported in the post war peak of 1966. Unfortunately the decade on decade decline in deaths since then has flat-lined post 2011 for unknown reasons. Nonetheless, the UK remains one of the safest countries in the world.

Neil noted that the advent of driverless cars is on the horizon. Surveys show that nearly 80% are against their introduction. More scarily, perhaps, is the potential for modern cars to be hacked; eg computer engine management, radio and sound systems, etc. For instance, a Jeep in the US was recently hacked through its tyre pressure monitoring system! Also unknown to most members, is that our cars’ systems now receive an update when we put them in for a service. And, if you think that’s a surprise, Tesla cars’ software is often is updated overnight. Big Brother is surely with us.

Two measures recently adopted in England Neil felt should be copied in Scotland. These were Roadside Drug Tests and Speed Awareness Courses for people who had been stopped for speeding rather than being fined. These had been welcomed and have had a positive effect on behaviour.

There’s not enough space here to do justice to Neil’s excellent talk. However, members found it extremely informative and enlightening. It confirmed that we are all good drivers (or think we are!). Crucially with age we have the experience to drive within our capacity and avoid the pitfalls of youth who, the statistics show, are much more dangerous on the road.