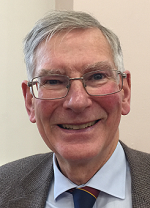 Stephen was born in Yorkshire, moved to East Anglia as a teenager and has degrees from the Universities of East Anglia and Warwick.  He worked initially in the paper industry, and settled in Glasgow over 40 years ago, living first on the south side before moving to Bearsden. He worked in marketing for Weir Pumps and Howden, and for John Brown Engineering (JBE), a gas turbine manufacturer and builder of power stations. Upon retirement he joined the Probus Club of Allander.