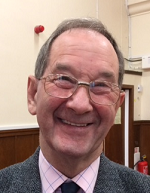 Peter opened by saying that he had been invited to introduce a little of himself before embarking on his talk on Burns. He told us about his childhood in Lanarkshire and remarked that he had grown up in a frugal family with the philosophy of ‘hand me down clothes’. His problem was he had an elder sister. This gave rise to raised eyebrows at school!! He also noted that he was an acquaintance of Alan Murphy. Peter told us he had taken the trouble to look up the meaning of Alan’s names. ‘Murphy’ he discovered was an auspicious name dating back to Anglo Saxon times and meant that the person was bright, good looking and attractive to women. ‘Alan’ he then explained meant ‘not very’!! So the scene was set for an entertaining talk.
Burns is celebrated worldwide. Peter was proud to note that the number of Burns’ statues is only exceeded by that of Queen Victoria. The oldest known statue is located in Camperdown, Victoria, Australia. It’s clear his reputation went before him. Moreover, his poems have been translated into most European languages. All that is, tongue well in cheek, English!
Peter was at pains to say that Burns was no simple ploughman as often portrayed. He had received a good education and was widely read. In his life he had many careers – farmer, flax dresser, exciseman and, once almost, as a book keeper in Jamaica which never came to pass. Of course, he is remembered principally as a poet and lyricist which made him world famous.
‘Why is more time not spent on Burns than Shakespeare in Scottish schools?’ Peter asked. A rhetorical question which was followed, appropriately, with a rendition of ‘ Scots wha hae’. Which in turn led to the puzzling question, ‘Can you remember Bert Weedon of BBC fame?’ Chortles from the floor indicated that many did. Peter reminded us that Bert had written a book ‘Learn to play the guitar in one day’. ‘Well he lied, it took much longer!’ he told us in mock outrage. However, the importance of this diversion was to tell the audience that it was Burns’ music which he first played on his guitar. A sign of his life long love of Burns’ work.
Drill down in Burns’ poems and songs and it kindles pride in being Scottish. However, Peter noted, it is also clear from his work that Burns was not averse to being British. His work contained wit, humour and scorn. And, woe betide you, if Burns turned one of his barbs at you. Peter told of a letter to his builder, Thomas Boyd, who was building a house for Burns and was late in delivering, Burns quoted Isaiah Chapter 13 verse 20 – ‘ It shall never be inhabited, neither shall it be dwelt in from generation to generation…’ A clear message, then, to his builder!
Peter is clearly proud that ‘Auld Lang Syne’ is, and remains, the international herald to New Year throughout the world. He was also clearly proud that the opening of the new Scottish Parliament was garnished by ‘ A man’s a man for a’ that’. As John McIndoe said in his vote of thanks, it is clear that Peter knows a lot about Robert Burns life as well as his music and poetry – a true ‘Immortal Memory’.