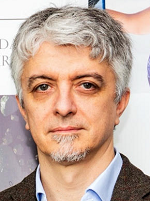 Massimiliano Vasile is currently Professor of Space Systems Engineering and Director of the Aerospace Centre of Excellence in the Department of Mechanical & Aerospace Engineering at the University of Strathclyde.  Previous to this, he was a Senior Lecturer in the Department of Aerospace Engineering and Head of Research for the Space Advanced Research Team at the University of Glasgow.  Before starting his academic career in 2004, he was the first member of the ESA Advanced Concepts Team and initiator of the ACT research stream on global trajectory optimisation, mission analysis and biomimicry.

He received his M.S. in 1996 and Ph.D. in 2001 from Politecnico di Milano.  He sits on the IAF Astrodynamics and Space Power committees, the IEEE committee on Emerging Technologies in Computational Intelligence, and the UN Space Mission Planning Advisory Group.  His research interests include Astrodynamics, Space Traffic Management, Computational Intelligence and Optimization Under Uncertainty exploring the limits of computer science at solving highly complex problems in science and engineering.

Professor Vasile’s research has been funded by the European Space Agency, the UK Space Agency, CNES (French Space Agency), the Engineering and Physical Sciences Research Council, the Planetary Society and the European Commission.   The Professor even has had an asteroid named after him, Asteroid 2002 PX33 acquired the name “Maxvasile” in recognition of Prof Vasile’s innovative techniques on projecting trajectories.  He has authored over 96 peer-reviewed journal publications, 25 papers in refereed proceedings, 6 book chapters, 206 conference papers and he has edited 5 books.