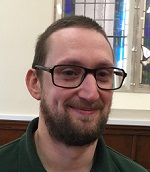 Kyle told us that he first learned about Food Banks in 2013 through the Church of Scotland General Assembly.  Their role caught his and his wife’s fancy as they had both been through the mill in their earlier lives and wanted to help others.  So they investigated how to open and run a Food Bank.  Here the Trussell Trust provided a model which worked for Kyle.  The Trusselll Trust is a UK wide organization which supports a network of food banks providing emergency food and support for people locked in poverty in the UK.  Interestingly Kyle observed that the Trussell Trust is based on a Bulgarian Food bank model!

Kyle manages three Food banks in the North West of the City, including Blawarthill.  Most Food banks are multi-centres.  While Kyle has three, there is one with as many as 14.  In 2013, when Kyle started, Trussell Trust supported only about 250 food banks in the UK.  Now they support more than 1200.  This growth has largely been driven by the changes in the Welfare system particularly with the roll out of Universal Credit.  Since starting his Food Bank Kyle has seen client traffic grow significantly.  In the last 12 months his Food Bank has supported 6,300 adults and children distributing some 89,000 meals.  To put this in perspective, last year the Trussell Trust provided more than 1.3 million emergency food supplies an increase of 13% on the previous year.

The Food Bank relies on donations from schools, churches and individuals who often place their donations in a shopping trolley at the supermarket.  This is also augmented by cash donations.  This cash is used to top up the food contributions.  Kyle indicated their Food Bank spend between one thousand and four thousand pounds a month to this end.  Volunteers sort out the food and check it is suitable to be given to people who are referred to the Food banks in crisis.  This can include helping ex-prisoners.  They have found that the provision of their food parcels helps reduce re-offending.  Kyle said that he has 40 volunteers helping in this work.  Crucially the Food Bank relies on partner care professionals such as doctors, teachers, health visitors and social workers to direct people in crisis.  This is done by giving them a food bank voucher to access emergency food for three days.  This referral approach is key to the effectiveness of the Food Bank.

Kyle made the point that the Food Bank don’t like people returning again and again as it’s a sign they haven’t got on top of their problems.  They find this is often the result of people being unable to cope with the complexities of the welfare system.  Here the Food Bank can have a dialogue with people in a crisis, establish what the problem is – for instance, it may simply be the inability to complete a claims form – and point the individual in direction of a counselor who can help them complete the form and get the support they need.  This rounded service is a recognition that many in crisis need support beyond their immediate food needs.

Last but not least, the Food Bank, through the Trussell Trust, has a relationship with the Scottish and UK Governments.  Here they seek to influence welfare rules to tackle the problems created by flaws in the benefits system.  It’s clear that the new Universal Benefits system is a current source of many of the problems.

Kyle presented members with a sobering picture of where things stand for people who find themselves in crisis.  He gave many examples of the different ways in which the Food Banks helped which couldn’t be covered here.  However, members are under no illusions that those in need face difficult times and that the Food Banks provide a remarkable safety net.