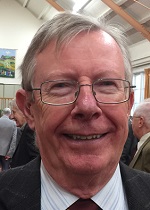 John Walls : A Flavour of the Canadian Maritimes

John Walls stepped into the breach when the scheduled speaker didn’t show.  His talk was on a 1500 mile tour of Nova Scotia (NS) that he did in September 2017.  John told his tale in many photographs.

Lunenburg, a UNESCO World Heritage Site, was first to impress John.  The town was settled in 1753 by French speaking Protestants.  They were fleeing persecution and high taxation in the Rhine Palatinate.  The town grew prosperous on fishing and boat building as illustrated by the legacy of attractive coloured buildings climbing up a South facing slope.  In its early years the town was protected by four blockhouses.  However, they didn’t prevent a raid from the Americans in 1782, one of the last skirmishes of the American Revolutionary War six years after the Declaration of Independence.  John’s tour took him to he Bay of Fundy.  A place which had fascinated him since school days because of its immense tidal range.  On spring tides it can be as much as 70 feet.  While there he spent a day whale watching and members saw many photos of the humpback whales and their tails in the air as they slipped below the waves.  John illustrated his frustrations trying to get the impression of the tidal range.  There was muddy basin at Wolfville at the turn of the low tide reluctant to refill and there was the tidal bore on the River Salmon, Truro – the wave of which must have been all of 18 inches high.  So efforts to see the tidal range all seemed at bit underwhelming, John naively assumed he would see the tide come in like a train.  Nonetheless the tidal generating station at Annapolis Royal in Canada built in 1984 demonstrated the power of the 160 million tons of water entering the Bay twice a day.    Further on in his travels, John progressed to Cape Breton where he went on the Cabot trail (185 miles).  His photos showed a beautiful coastal road with stunning views.  Here because of the rocky nature of the coast line, one finds small cairns of stones instead of the usual sand castles!  People familiar with the West Highlands would feel quite at home.  After the Cabot Trail, the tour took John to Louisbourg, a former 18th century French Fortress. This carefully restored fortress had fallen in 1763 at the end of the seven years war.

The wow factor for John was visiting Alexander Graham Bell’s Museum in Baddeck, Cape Breton,near where he had once lived.  The museum is not merely about his phone invention but all the other things that Bell had experimented with, often in collaboration with others.  This included hydrofoils and the British Empire’s first heavier than air powered aircraft, the Silver Dart.  It flew in February1909.  John concluded it was time Scotland knew more about one of its most successful sons.

John covered much more ground in his talk than can be covered here.  However, members received further garnishes from Hamish Eadie and John MacMillan.  Hamish had lived and worked in Cape Breton and shared some of his NS experiences.  John, whose daughter lives in NS, was kind enough to say that he learned a lot despite having visited NS a number of times.  For speaker John, a nice accolade!