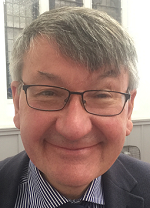 Jeremy Smith is Professor of English Philology at the University of Glasgow. He is a Fellow of the Royal Society of Edinburgh, and of the English Association, and an Honorary Fellow of the Association Scottish Literary Studies. He has served as convener of the board of Scottish Language Dictionaries (2013-2018), and is a long-standing member of council of the Scottish Text Society, and he will be drawing on this experience in his talk.

Jeremy Smith’s current teaching and research ranges from English historical linguistics, the history of Scots, and book history to the language of Robert Burns. His forthcoming monograph Transforming Early English (CUP), funded by the Leverhulme Trust, discusses the reworking of medieval English and Scots texts as they were transmitted in subsequent centuries.