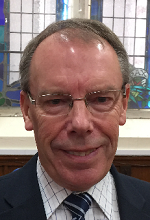 Gordon began by looking at the history of paddle steamers on the Clyde.   In 1870 there were 76 piers served by 50 vessels.    When the original Waverley joined the fleet in 1899 there were 47 paddle steamers.   She served until being lost in the Dunkirk evacuation.    The replacement was commissioned in 1945, launched in 1946 and finally entered service on 18 June 1947 with LNER which on rail nationalisation in 1948 became the Caledonian Steam Packet Company (CSPC).   The capacity then was 1350 but is now set at 700.    In 1969 the Paddle Steamer Preservation Society (PSPS) was founded and began an involvement with the ship in 1973 which culminated in the now owners (CalMac) selling the ship to them for a token £1 on 8 August 1974.   Given the extensive repairs required there was no expectation that the ship would sail again but a public appeal raised £100,000 and so a timetabled summer programme began on the Clyde in 1975.  In 1976 this extended south from Ayr to Stranraer then in 1977 to Liverpool.   A grounding on The Gantocks near Dunoon almost ended the venture with an £80,000 bill and the loss of six weeks revenue.   However in 1978 the decision was taken to make the 2 1/2 day journey to London.  In four weeks 54,000 passengers were carried and enabled the group to continue.

Gordon then took the club members through the areas covered by the Waverley in a season, illustrated by photographs of the ship in many beautiful locations in the splendidly sunny Scottish weather.   Gordon pointed out that you do not take photographs in the rain!    The trip began at its Glasgow base and followed the Clyde to Helensburgh, then on to Bute and Arran.    There were views of the Kyles of Bute and Kilbrannan Sound followed by Campbeltown.   It was then up the west coast by Islay and Corryvreckan to Oban, a base for ten days.   From here visits are made to Tobermory on Mull, Portree on Skye and, the most northerly destination, Gairloch.    The journey south to London was shown with calls such as Liverpool, Llandudno, Bristol, Lundy and Ilfracombe.   London is a good money earner from late September to late October with trips from central London to Southend with short sails available from there before the return journey.  There were many amusing and interesting anecdotes including the day trip from Garlieston on the Solway to Douglas (Isle of Man) which was stormbound for three days!   A feature was that many passengers did not realise that, unlike modern ships, there is little indoor accommodation.   Most seating is on outdoor decks.

Waverley has undergone many modifications over its life, for example new boiler (1981), iron decking  (1982).   Between 2000 and 2003 the Heritage Lottery Fund paid for a complete rebuild at Great Yarmouth but demanded the ship be returned to its 1947 configuration and livery.   It is really only the engine which remains of the original ship.   Some of the difficulties of running a cruise programme were explained with a breakdown of the annual expenditure of £2,400,000.   Highlighted was the cost of fuel with a tanker load costing £8,000 and giving two to three days of cruising. Piers have been closed or modernised in a form creating berthing complications.  There are challenges in developments and changes in Health and Safety, Working Hours, Management Systems, Route Planning, Security and Pollution Control.   In many cases special arrangements have to be made because of the uniqueness of Waverley.   Training is a constant frustration for all levels of crew with some leaving to more lucrative or year round positions.   This means many crew come from abroad and there is a constant need for volunteers.  Gordon hoped the membership would participate in some way to ensure the continuation of Waverley sailings.

As usual at the end the Probus members produced a variety of questions which Gordon answered with the clarity and humour he had shown throughout the talk.   The hearty response from the audience when he was formally thanked showed how well it had been received.   Nothing beats nostalgia!