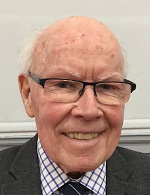 Alan MacDonald produced an illuminating talk, highlighting Scottish painters, including George Jameson (1587-1644), Nasmyth, Raeburn, Ramsay, the Glasgow Boys and the Scottish colourists. The last of the subjects of Alan’s talk, J D Ferguson, died in 1961. Although one or two of the paintings he included are not held by Glasgow Museums, they illustrated the development of Scottish art through nearly four centuries. Many of the pictures are hanging in Glasgow’s galleries and can be readily viewed.

Although only indirectly Scottish, an interesting aside came from a reference to the painting ‘Christ of St John of the Cross’ which, when purchased by Glasgow Corporation for £8,000, caused an uproar because it was seen to be an extravagance and a waste of money. In fact Dali had given the authorities the copyright and it recouped the cost of the picture from the sale of prints etc. in six months.

This was a talk presented in a serious mode of artistic appreciation, with a little humorous content, and held the audience from start to finish. Whether you were an aficionado or philistine you came away with something.