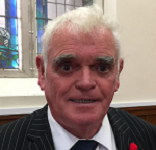 George showed he’d inherited his father’s sense of humour in his introduction.  He told of the time his father was being interviewed by a young Daily Record reporter.  “Do people drown here often?” the reporter asked.  “No, just once!” was the snappy reply.
The Glasgow Humane Society was established in 1790 and one of the oldest of its kind in the world.  Mr James Coulter, Surgeon, had left the sum of £200 to set up the Society which was added to by Glasgow business men including David Dale.  Although the River Clyde at the time was relatively shallow, it frequently flooded and drownings were frequent.  During the Society’s life time they can claim to have saved hundreds of lives.
George graphically described the river in the City’s heydays of traditional industry as a gigantic gutter carrying all the pollution of the day – oil, paint, dyes and overflow from Dalmarnock Sewage Treatment Works.  Fortunately much of that has now gone and there are fish, including salmon, in the river again albeit that George wouldn’t be keen to eat them!
The focus of the Humane Society was summed up by George as Prevention, Rescue and Recovery.  Indeed it became clear that much of the Society’s work focused on prevention.  The Society works with the local authority to ensure that bridges being upgraded or new bridges crossing the river are designed safely to prevent people clambering or sitting on the balustrade and falling into the river.  They also provide lifebuoys and ladders in vulnerable places.  Each lifebuoy post now has a unique location number for people to use when calling the Emergency Services to speed up the delivery of aid.
The Society also provide advice and guidance to the Scottish Environmental Protection Agency and Scottish Water who have flood control and water quality responsibilities.  Over time the Emergency Services have played a bigger role in providing rescue cover.  As George observed the Humane Society wasn’t resourced to do 24 hours, 7 days a week and they are happy to work in partnership with the services.  In recent times Glasgow City Council have set up a Water Safety Group which has acquired a national reputation for competence and effectiveness.
The Society’s regular patrols along the river allows them to spot dangers such as movement of the river bank.  This monitoring is welcomed by both the Council and companies on the river bank who can take appropriate action sooner rather than later.
George shared a number of colourful experiences including a young lad, clearly a Western movie fan, using smoke signals to raise the alarm and of sharing his boat with a pit bull terrier he rescued from the river much to the entertainment of members.  Unfortunately there isn’t enough space here to tell it all.  However, members enjoyed George’s vivid portrayal of his life as a Riverman.  (For more see http://www.glasgowhumanesociety.com)