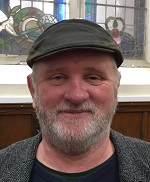 GalGael  was founded in the 1990s by Gahen and Colin Macleod following protest against the building of the M77 through Pollok Park.

It became a community and heritage association based in Fairley St in Govan working with recovering drug addicts, alcoholics, people suffering from mental health problems, released prisoners and the long term unemployed.   They run a number of twelve – week courses for interested candidates teaching them the use of tools and the satisfaction of achievement.

Initially trees blow down in a storm were used to carve ornaments and models but moved on to repairing and building wooden boats.   The first boat was a 16 foot “birlin” but moved on to the 32 foot full size “Orcuan”  which was     launched on the River Clyde by the Deputy Social Justice Minister for Scotland and promptly sailed Eigg.   The following year she was sailed to Ireland.

“GalGale” comes from the 9th century Norsemen who mingled with native Celts.   “Gall” meaning foreigner and Gael” native.   Telling us all about GalGael is Tam McGarvey.