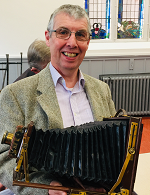 DOUGLAS ANNAN :  after leaving school went to college to study photography for two years, then joined the family firm of T & R Annan & Sons Ltd.,  (set up by his great, great grandfather in 1855) by this stage the business was principally involved in art dealing, but continued to sell many of the old Glasgow photographs taken by earlier generations of the family. Douglas developed a picture framing side to the business.   In 2006 it was felt right to leave the art dealing side of the company and this was passed on to others. Douglas retained the old photographs and family and firm’s archive material.   In 2008 Douglas moved into a totally different world, working in the finance side of Royal Dutch Shell, thinking this would just be a short term arrangement, but stayed there for for over eight years and also became their “unofficial, official“ photographer.   In 2016 the opportunity came to leave Shell and since then Douglas has been researching and cataloguing the family and firm’s archives and continues to supplyAnnan photographs (via a very dated website!) of Old Glasgow to various media and publishing organisations, including Glasgow Museums and The Getty Museum in Los Angeles.   He visits all kinds of groups and societies to give various talks and lectures eg   Old Glasgow through the lens,  Glasgow Old and New etc… His most recent talk is entitled “My Photographic journey……. from 1855” which gives an insight into the family history showing many of his ancestors photographs along with some of Douglas’ own more recent wide and varied images!

One thought on “Douglas Annan”