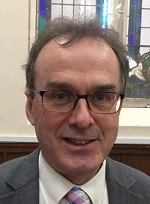 Professor Adams is a Commissioner of the Scottish Land Commission (SLC).  It was established on 1stApril 2017 and is a product of the Land Reform (Scotland) Act 2016.  It is an arms length Government organization whose remit is focused on policy, research, information and guidance, not on itself owning land.  The Commission is intended to move forward the debate on Scottish land reform, both urban and rural, in terms of both law and policy.  (It has already developed a strategy, see‘Making More of Scotland’s Land’ on SLC’s website (https://landcommission.gov.scot/).

The Commission despite its youth, has already initiated a series of informative studies on land banking, public interest led development, Vacant & Derelict Land and Compulsory Sales Orders (CSOs).  The thrust of its work is aiming to make Scotland’s land more productive in the broadest sense, and its ownership more diverse and accountable. In this regard, explorations are taking place seeking to modernise land ownership; egthrough more community buy outs, looking to see if there are lessons in how other countries tax land to influence its better use and addressing barriers to young farmers who find difficulty securing tenant farms.  Official surveys of Vacant & Derelict Land have already suggested that 75% of vacant urban land and nearly 50% of derelict land could be developed within 10 years. The Commission’s view is that Compulsory Sales Orders (CSOs) could help overcome any ownership inertia.  That is, CSOs which provide powers to local authorities to arrange the auction of such land and bring it back into beneficial use.  The concept has already gained traction with the government which is now committed to introduce powers for CSOs in the near future.

On concluding this snapshot of SLC’s origins and current work, Prof Adams opened the floor to questions. It proved he need not fear an unresponsive audience as there was a flood of questions.  There isn’t enough space here to cover all the issues raised.  However, the selection below gives a flavour of the ground covered.

Is Brexit going to have an impact?  Prof Adams smiled at the predictable question on the issue of the day!  ‘Well probably’, he responded!  With respect to agriculture there are grant and tax issues which will undoubtedly change over time.  It is apparent that there can already be conflicts in Government policy between farming and forestry.  So watch this space.

Given that much former industrial land is contaminated, is that not a big barrier to its reclamation and value for development?  Prof Adams observed the issue is often overblown and that, crucially, money is still to be made.  However, he acknowledges that innovation is often key; for instance, the use of tree planting to help decontaminate the soil.

Concerns were raised about foreign ownership.  This proves to be very nuanced; eg whether the owner is living on the land or it is non-indigenous ownership for tax or other reasons.  Prof Adams observed that it might take some years before the Land Register can provide the necessary information on who owns all of Scotland’s land.  However, he did indicate that new regulation is in the pipeline to identify controlling interests more effectively.

One member expressed curiosity about the recruitment of the Commissioners, a somewhat loaded question!  Prof Adams gave a full explanation detailing the Scottish Government Open Advert system where applicants have to declare their interests and affiliations.  The interview panel included an independent retired judge.  The key attribute sought was ‘judgement’.  In short, it wasn’t jobs for the boys’!  A good and re–assuring answer.

Intriguingly, Prof Adams revealed that he and the other Commissioners had to undergo training as non-executive Board members.  This included advice on how to avoid future bad publicity in the newspapers.  The advice had been crafted after an analysis of 2 or 3 decades of newspaper reports.

With respect to the treatment of derelict land, the question arose about whether sustainability should be one of the objectives?  Recent reports are revealing that the number of insects are declining dramatically through climate change and industrial agricultural techniques.  Prof Adams observed that SLC is committed to exploring radical solutions to improve the productivity of land.  He explainedSLC’s draft strategy had started with around 10 objectives including sustainability but they had been whittled down to three.  Nonetheless, sustainabilityis still implied in the remaining objectives!

What is SLC’s view on Land Value Tax?  Prof Adams that research on the subject has been commissioned.  This involves looking at the systems of 6 countries.

If land is auctioned and sold as a result of a Compulsory Sales Order (CSO), who gets the proceeds?  Prof Adams explained that it is the land owner.  However, the local authority would be able to recover their costs in initiating the auction.  And, although most assume that it is private land whichwould be the subject of a CSO, it was not intended to restrict the powers simply to private land.

As indicated, these are only a selection of the issues discussed.  Throughout Prof Adams commanded the respect of members with his full,and often insightful answers, even at their most challenging.  This was an extremely interesting and informative talk about explorations on law and policy with respect to Scotland’s land and the potential for it to serve the country and its people better.

The Members wishing to know more about the Commission and access its research publications can go to the web(https://landcommission.gov.scot/).

One thought on “David Adams talk”