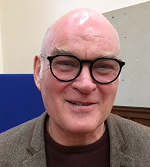 From the outset Chris O’Connell, Scottish Canals Senior Heritage Advisor, stressed the importance of canals to Scotland’s history.  They are scheduled historic monuments.  The Canals have had a variety of ownerships since the 18th Century, including the North British Locomotive Company, the Ministry of Transport and the British Waterways Board. They have an intact set of records back to the late 18th Century.  As a result Scottish Canals have decided to donate their historically important archives to the National Library.
Mr O’Connell had brought along a few examples of these old records for members to peruse after the talk.  These included drawings of a steam incline plane on the Monklands Canal designed by James Leslie, Engineer, Dundee.  Such incline planes, were funicular railways used to raise and lower canal boats instead of locks.  This had the advantage of not requiring the replacement of large volumes of water in the opening and closing of locks.
Much of his work is aimed at improving the appeal of the canals to the public and to encourage tourist use.  To this end, the interpretation material is being made far more pictorial and hands on  (Chris would welcome old canal photographs from members!, Contact Stewart Roy).  For example, on the Caledonian Canal the interpretation boards have been augmented with cases to contain the typical tools used by the navvies in the 18th and 19th Century.  In addition, they have built a dummy capstan for opening and closing lock gates so that people, especially children, can experience what it was like.
A lot of effort is going into cultivating local communities along the canals.  The former Victoria Foundry, near Applecross Street, was a case in point.  Here Scottish Canals hired Archaeology Scotland, a charitable organization, to conduct a survey of the old foundry area which had become a source of nuisance.  This generated much local enthusiasm and attracted along metal detectorists (who looked reminiscent of the Ghostbusters once they were all kitted up!).  Glasgow School of Art brought along a mobile foundry at weekends and organized quirky events to appeal to the local children.
Another eyesore site was at the former Gleaner Oil Refinery on the Crinan canal closed in the 1970s, losing Scottish Canals friends in Ardrishaig.  The Chief Executive challenged Mr O’Connell to clean up the ‘mess’.  Given a modest budget, he used the site as a ‘canvas’.  Chris arranged for the former tanks and buildings to get a paint job.  Images were painted on the tanks, a canal map was painted on the concreted ground and skittles were made from old paraffin cans.  A much more friendly way to engage with locals!

Finally it was also interesting to learn that the canals formed part of an integrated water management system in Greater Glasgow.  By monitoring the weather forecasts, the canal levels could be adjusted to take away excess surface water and minimize flooding risks.  This was a very enjoyable talk on one of Scotland’s under appreciated assets.