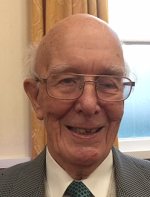 Bob Crawford has become a Club treasure through the many walks he has led over the years.  Followed, of course, by a brief entertaining tale at the next meeting.  At the last meeting he shared his knowledge of the history of Glasgow University with the Club.  He started with photographs of the University when it was still at High Street, raising unasked questions as to whether Bob had actually started his career there!
Bob was clearly proud of the fact that Glasgow (1451) is the fourth oldest university in the UK after Oxford, Cambridge and, that place in the East, St Andrew’s (1413).  He told us of the university’s move from the High Street to Gilmourhill in 1870.  The incentives to move to more pleasant and healthier surroundings in the West End were threefold.  The foul drainage in the area, the ‘red light’ district surroundings plus a financial offer they couldn’t refuse from the Railway Companies for a Goods Yard on the University’s land.  Discussion revealed entertaining stories of students and staff having to run a gauntlet of prostitutes through what was known as the Havana Vennel to get to the university.  However, not so happily, it also emerged that Lord Kelvin’s brother, on the staff, died of Typhus!  A good reason to move.
When Bob finished his apprenticeship as an electrician after his war service, he was recruited to work in the Estates Department by one of his former Scouts Officers, Archie McCorkindale.  Interestingly when he started, the University was powered by DC electricity long after the introduction of AC electricity was common place.  So Bob was in on the ground floor when the University changed to an AC supply requiring major improvements to the cabling and wiring of the University Campus and Buildings.  He showed photos of the old DC switchroom observing that the brass distribution board disappeared quickly for its scrap value.
One of Bob’s key responsibilities was keeping the university buildings warm.  The original 1870 system had been funded by the Marquis of Bute.  The boiler room occupied the basement of one of the Towers.  To deliver heat around the university complex there were extensive service tunnels running from the boilers underneath the buildings .  The heating was designed never to let the buildings temperature to drop below 50 degrees (F) albeit the day time temperature was set at 57 degrees (F) somewhat Spartan by present day standards.  Prior to the arrival of electric lighting all the lecture rooms faced outwards to get the best natural light.
All the original technology has disappeared and has been replaced by a modern efficient Combined Heat & Power heating system.  No longer does waste heat go up the chimney to warm up the atmosphere.  The Energy Room (no longer a boiler room observed Bob) also has thermal stores to retain surplus heat which can be fed into the heating system later.
Finally after many anecdotes, during the vote of thanks, we learned Hamish had calculated Bob’s walks added up were the equivalent of walking to Berlin.  That would have taken Bob some explaining!  Sprechen Sie Englisch?