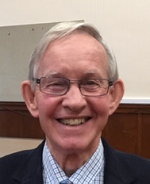 Bob Bradnock was born in India of missionary parents. After reading Geography at Cambridge he carried out research in India in the mid-1960s and took his PhD from the School of Oriental and African Studies (SOAS) in the University of London. He became Head of the Geography Department at SOAS and subsequently Senior Visiting Research Fellow at King’s College London and Research Fellow at the Royal Institute for International Affairs, Chatham House. He has published extensively, particularly on geopolitics and the environment relating to South Asia. His books include India’s Foreign Policy since 1971, and a Chatham House Report, Kashmir: Paths to Peace, published in 2010, based on a large opinion poll conducted in Indian and Pakistani Kashmir. His most recent book is the Routledge Atlas of South Asian Affairs. Bob has broadcast widely on South Asian current affairs on the BBC and networks around the world.

The Bob and his wife Roma, who herself is a Bengali, wrote the Footprint series of Handbooks to South Asia, first published in the 1990s, and separate handbooks to India, Goa, South India, The Indian Himalaya, Rajasthan and Gujarat, and Sri Lanka.